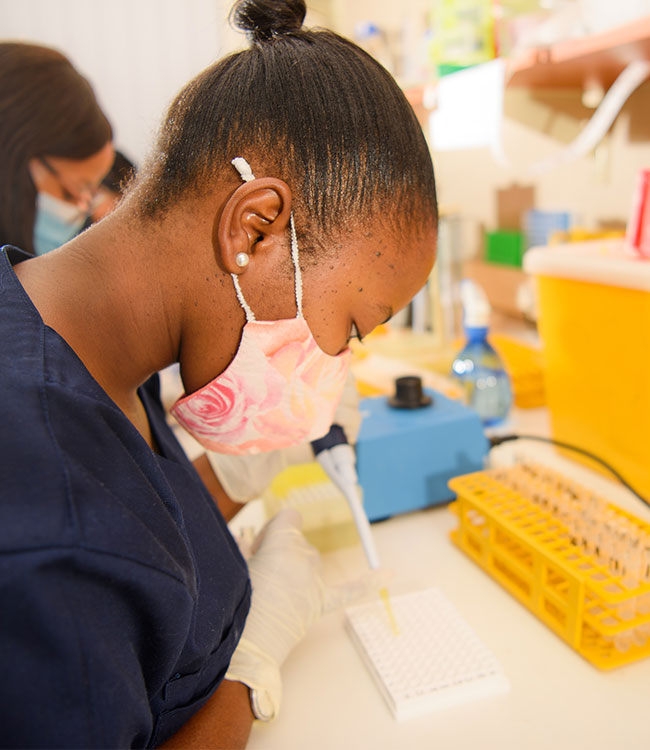 Wits VIDA’s current focus areas include next-generation vaccines against rotavirus and TB, as well as development of novel vaccines targeted at pregnant women to protect their young infants against the leading causes of sepsis and pneumonia. Furthermore, Wits VIDA is one of seven participating units in the multi-country Child Health and Mortality Prevention Surveillance (CHAMPS) programme, which aims at providing refined estimates as to the causes of stillbirths and under-5 childhood deaths in low-middle income countries (LMICs).

In 2020, Wits VIDA embarked on leading the first two COVID-19 vaccine studies on the African continent, the Oxford and Novavax trials, and has undertaken multiple epidemiological and immunology studies on COVID-19 in healthcare workers, adults and pregnant women.

Through this research Wits VIDA aims to identify protein antigens common to most GBS invasive isolates with potential to be developed into vaccine candidates; as well as pre-clinical and clinical development and evaluation of GBS polysaccharide-protein conjugate vaccines.

This research aims to identify protein antigens common to most GBS invasive isolates with potential to be developed into vaccine candidates; and clinical Building on past research on maternal influenza vaccination in protecting the women and their young infants against influenza illness, this research will address remaining questions geared toward better understanding the immune mediators for protection, especially among women living with HIV.

Key areas of the research:

Wits VIDA was pivotal in the introduction of the PCV into the South African National EPI. South Africa became the first African and middle-income country to introduce PCV into public immunization program in April 2009 following a study conducted by the unit. These findings were published in the New England Journal of Medicine, 2003. The findings informed global policy through recommendations made by the World Health Organization in 2007.

Child Health and Mortality Prevention Surveillance (CHAMPS), funded by the Bill and Melinda Gates Foundation, works to save children’s lives by collecting, analysing, and sharing accurate, timely data about the causes of child mortality in the regions where it is highest. CHAMPS transforms data into action, working at the local, national and global levels to ensure sustainable changes in policies, systems, and health interventions to accelerate improvements in child health. The CHAMPS study is in 6 countries in Africa and 1 country in Asia.

In South Africa CHAMPS started in 2016 and aligned with the broad CHAMPS objectives, minimal invasive tissue sampling (MITS) is done in children aged less than 5 years who die in the community or at health facilities in Soweto and Thembelihle.  Information for MITS, clinical/hospital records and verbal autopsies is assessed by a panel of experts to determine the reason why the child died as well as evaluate whether the death was preventable or not.

The CHAMPS programme has 3 streams:

Despite the reduction observed in pneumonia hospitalization since the introduction of pneumococcal conjugate vaccine into the public immunization program in South Africa, pneumonia still remains a leading cause of hospitalization and death among children in South Africa and globally. Also, pneumonia during early childhood might lead to long- term sequelae such as recurrent wheezing and asthma, particularly if due to respiratory viruses.

Following pioneering research by the unit, South Africa was the first African country to introduce the rotavirus vaccine into public immunization program in August 2009. Findings on the “Effect of Human Rotavirus Vaccine on Severe Diarrhea in African Infants”, published in the New England Journal of Medicine (2010), further influenced global policy through the recommendation of the World Health Organization.

The unit has contributed numerous Rotavirus vaccine studies that have played a pivotal role in understanding the safety and efficacy of the vaccine in South African Children. [5][6]

Key areas of the research:

Wits VIDA established a sentinel‐based hospital surveillance for investigation of SARS‐CoV‐2 in hospitalised patients in 3 provinces in South Africa. We are evaluating the disease burden and clinical outcomes in people living with HIV and those without HIV following COVID-19 hospitalisation. In parallel we are undertaking post-mortem minimal invasive tissue sampling in fatal cases of COVID-19.

Along with our long standing interest in maternal and neonatal health we are assessing if SARS-CoV-2 infection during pregnancy is associated with poor foetal outcomes. Since healthcare workers (HCW) are at the frontline of the COVID-19 outbreak response they are exposed to threats that put them at high risk of infection. On a longitudinal cohort study we are also investigating the epidemiology of SARS-CoV-2 infection among HCW from Chris Hani Baragwanath Academic Hospital.